Today, much like with the Hunter series, the Crescent Shield series, and the Black Hawk series; we’ll be taking an in-depth look at the security and luxury features of the Hollon Republic Gun Safe series. The Republic series is Hollon’s premiere gun safe. All units produced by the Corpus Christi safe company with higher ratings than the Republic series are classified by Underwriter’s Laboratories as TL or Tool-Resistant units. What this means is that these units are the most robust safes Hollon offers before moving to custom vaults that are only built to order.

Guardian Safe & Lock is the locksmith Houston trusts as well as Hollon’s Houston gun safe dealer of choice. If you are interested in Republic Safes or TL-rated units surpassing them, come to us to order. But for now, on to the review!

The History Of Hollon Safes

Hollon Safes is a family-owned business owned and founded by former locksmith Zack Gilmore in 2007. Drawn to the idea of creating a mid-range safe that falls somewhere between the price point of the useless thin steel boxes of the low-end of the market, and the price point of the more secure units of the higher end of the market. He decided to create the Hollon Safe company in Corpus Christi, Texas to bring value and security to the safe manufacturing industry.

Hollon gun safes have since then quickly become some of the best-selling units in the industry, proving Hollon Safes’ quality and value. We here at Guardian Safe & Lock appreciate this philosophy. We have sold, delivered, and bolted down Hollon safes for many satisfied customers. That’s why we’re going over the Hollon gun safes Hunter series, to help you save money while gaining the value of your potential gun safe.

As we’ve previously stated in this review, Republic series gun safes are built as the strongest non-custom units Hollon can offer. If you’ve read our other reviews, you’ll know Hollon doesn’t skimp on security features. This is apparent nowhere more than in the Republic series. 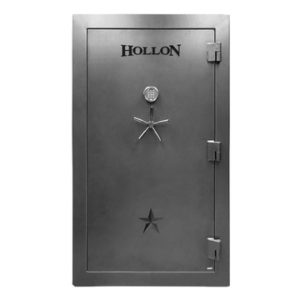 Hollon Republic gun safes are built with 10 gauge steel, which is already 300% thicker than most competitors at its price point. It also includes fourteen and a half-inch active locking bolts providing 4-way protection around the entirety of the door. These bolts are also 90% longer than the industry standards. All other Hollon gun safe series only have 3-way active bolts with one side being stationary, but the Republic series has all four sides covered with active bolts.

Hollon also installed their custom-built vault-styled no-sag hinges on the exterior of the door. You can tell these are solid steel due to signs of welding along with the components. While hinge-cap designs or interior hinges may look slightly more aesthetically pleasing to some and be smaller in size, they tend to be assembled with epoxy or lower the safe’s fire rating. Interior hinges also tend to not allow the safe door to open fully to 180 degrees.

In addition to these anti-theft features, this superb burglary safe also includes a drill/ballistic resistant armored ball-bearing hard plate and a ¼“ hardened steel plate over the entire door to prevent pry and punch attacks to the door and lock. Even if a thief was sophisticated enough to find a tool that could get through this robust security, an active spring-loaded relocker would get in their way. The relocker would drop a steel post into the railing of the door bolts, and not allow the bolts to retract.

The Republic Gun Safe by Hollon safes doesn’t just improve on standards for burglary protection but also exemplifies fire safe design too. The Republic series offers full fire protection for 120 minutes. That’s right, this safe has been tested by the Underwriter’s Laboratories and is fully certified to keep documents and ammo safe for up to two hours in a fire burning at 1400 degrees Fahrenheit. This rating also extends to the safes’ exterior, which is certified to be torch resistant.

The Republic also includes as standard an intumescent seal wrapping the door. This seal is made from materials designed to expand up to 8 times its’ initial size in order to protect the contents of the safe from moisture, smoke, and water. This ensures that in the event of a catastrophic fire that your belongings aren’t damaged by secondary elements. Should a pipe burst or the smoke of the fire be otherwise contained in the same room as the safe, neither will find their way to your property.

In addition to this fire protection, the lock itself contains EMP-resistant components. This means that in the event of a massive solar flare, or activation of an emp device, or a nuclear event that the electronics of the keypad and lock will continue to function despite electromagnetic pulse.

Much like the Black Hawk and other gun safes produced by Hollon, they’ve outdone themselves with added features. As standard, all Republic gun safes come with a full internal ultra-plush lining. This ensures that your guns are protected from accidental knicks and scratches to the metal. The exterior is also textured and maintains advanced durability over many other units.

The Republic also contains several shelves that are fully adjustable and removable, including racks for rifles. The top shelf also includes a cutout for exceedingly long rifles or other property that otherwise would necessitate the removal of the shelf entirely to fit. These shelves are reinforced and can easily support up to 50 pounds of load weight.

The interior also offers as standard a full LED lighting kit and U.L. certified electrical outlets. These outlets can supply power from a battery unit or be wired to connect to your home or office’s power grid externally, allowing for powered dehumidifiers or any other standard electronic device you may wish to store and power inside. It also has two USB ports so that you can charge other devices such as scopes.

In addition to all of this, again as standard, the interior of the door includes a mounted pocket organizer, including pistol holsters and zipper bags for added usage of space inside of the unit. This door unit is made of heavy-duty canvas and can give you a large amount of additional space for pistols, ammo, scopes, and misc other items.

Finally, as with most Hollon Gun Safes, the Republic series has 4 pre-drilled bolt-down holes and the hardware to mount it to a solid foundation. This is essential to prevent tipping and damage to the surrounding area and the rare circumstance that thieves may try to lift and remove the safe. 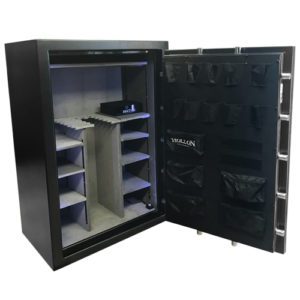 As we’ve said before and will continue to say with these gun safes, Hollon is a manufacturer that brings unprecedented value to the Gun Safe industry. While the Republic is a bit more costly than other safes produced by the Corpus Christi safe company, you’re easily still saving thousands of dollars going with these safes than equivalent units produced by others.

The Republic series of Gun Safes By Hollon gets the Guardian Safe & Lock seal of approval for its’ overwhelmingly fantastic theft and fire protection systems as well as its’ unmatched luxury features compared to most other gun safes on the market. If you’re looking for a security container for firearms, electronics, documents, currency, or anything else, there’s not much that can compete with the Republic for value and quality.

Guardian Safe & Lock is the most trusted safe locksmith in Houston, with 10 years of experience troubleshooting, installing, and selling security safes. We’re also Houston access control installation specialists and the Houston security camera installer that people call on for both analog and digital camera options in addition to standard locksmith services.

When you need security work done, or an opinion you can trust in regards to protection; we’re the company to call. If you’re interested in these services, the Republic Safe, or many other units; give us a call at 832-534-8687. Or see our Tomball showroom at 27920 Tomball Parkway Suite 240, Tomball, Tx, 77375. We have many products and solutions available to ensure your safety and peace of mind.